Two unconnected events in the first week of 2021 have sped the adoption of decentralised real time communication.

WhatsApp is being sucked dry by its data mining owner

The first was an update to WhatsApp’s privacy policy. Rarely has a privacy policy managed to generate quite so much media coverage. Perhaps the first working day of the year wasn’t such a good time to bury bad news after all.

The obfuscation game will keep lawyers and PR people happy for months, but for the majority of punters the message was clear; WhatsApp is no longer the stepchild at the back of the photo, left to do its own thing. It’ll be sharing more of its data with the Facebook family. Much more.

Whether that’s to be able to profile people in yet more detail, stymy competition, produce more profit or to protect it from being forced to break-up is anyone’s guess. Given it’s a listed company - and therefore its first priority is shareholder return - it’s probably all four. 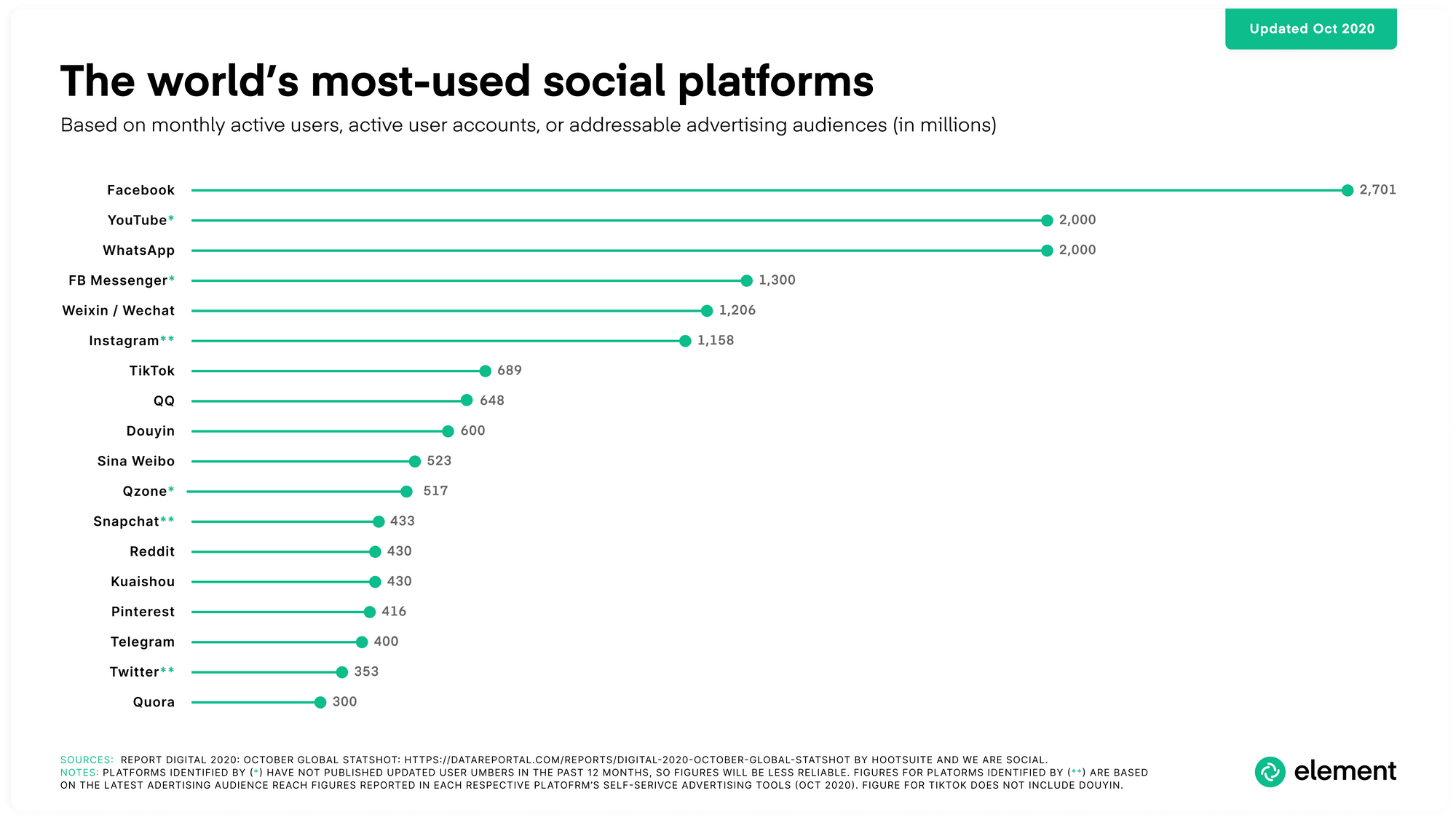 As shown in the graphic, the power it yields is immense. Facebook owns four of the biggest six social media platforms in the world. Through its centralised technology stack, its algorithms control the information feeds for the majority of people connected to the web, and the ever closer union between its products brings an Orwellian scale to its influence. The Cambridge Analytica scandal gives a glimpse of just how powerful the major platforms have become.

In short, WhatsApp’s privacy policy will probably be remembered as the moment that the ‘average Joe’ realised they had no ownership, control or influence in the messaging app they were using.

Why? Because they are using a centralised app that retains all the power, all the data and all the people they talk to. One huge walled garden that relentlessly harvests its users.

Switching to Signal (as Elon Musk suggested) is one approach - but Signal is just as centralised as Facebook; even if it optimises for privacy.  It’s not clear that putting all your communication eggs in one centralised basket is ever a good idea, given the power and trust which is then invested in that provider.

The Dark Satanic Mills of the centralised era of social media

Which brings us to the second event of the week; the storming of Capitol Hill, the end of the Trump era and his banning from the main social media platforms.

The answer is to remove the centralisation. Users should be able to make up their own minds and make their own censorship decisions - something that we’re actively working on and supporting via Matrix’s decentralised reputation work.

The in-built benefits of decentralised technology

The digital landscape is dominated by centralised tech giants; principally Google and Facebook but there’s a whole host of others who have also developed proprietary systems that they own and control from top to bottom.

That level of control is often initially welcomed as that stovepipe works cleanly, given the tight integration which can be easily applied to each constituent part. But it leads to a level of lock-in that takes power away from users. Vendors make it impossible to step outside of their proprietary ecosystem, and are free to change prices, privacy policies, terms and conditions that users just have to suck up.

Open source, open standards and decentralised technology gives users control. Open source lets people build on top of what already exists. Open standards means a vibrant ecosystem and marketplace can thrive, competing through innovation that gives customers endless choice. Decentralisation lets people own their own service - the data they generate and, in doing so, returns them their privacy and leaves them free from data mining.

It removes the surveillance capitalism that has brought such turmoil and division to not just elections, but everyday life.

There has to be a better way

As for the Trump debacle; hopefully from that comes the realisation that centralised, top-down social media moderation has failed. It doesn’t reflect on any of big tech’s CEOs. The tech giants grew incredibly quickly in a way no one foresaw. They didn’t know the dangers of the centralised systems they were building, or how they would be manipulated by others. But, clearly, these now huge corporations are struggling to find answers that are long overdue.

The answer, we passionately believe, lies in the restoration of privacy-preserving open networks and decentralised technology.